Late last year I designed a new character for Jon Schindehette at D&D.  He was to be named Isteval.  The writers at D&D provided me with an awesome description of an old paladin who's glory days were well behind him now, yet he still had some stature and pride.


Ultimately he was to be part of a large lineup of characters for the next Sundering adventure for Forgotten Realms. This was another layered image containing many characters I had addressed in some other covers for D&D as well as a few new ones.

Each character had to be on its own layer, very much like the previous Sundering image I created.  Here are a few shots of some of the layers as well as a few closeups.  The full image ended up being pretty enormous. I had a blast working on this one. 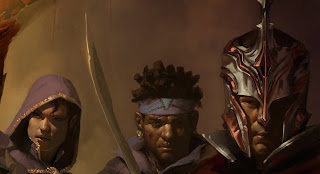 I also had to go into some detail for the stained glass window in the background.

Finally, the crew at D&D ended up putting together some pretty amazing stuff.  They had a cinematic video created that featured Isteval in full 3 dimensional action walking around in a scene which also contained my stained glass window.  I was completely floored when I saw all this.  I never imagined my character coming to life like this.  Huge thanks and congratulations to everyone at D&D that made this happen.

You can find the full video here: http://www.youtube.com/watch?v=2W__zxJroio&feature=share

Jon also did a nice write up about mere here, discussing my time working with D&D over the years:  http://www.wizards.com/dnd/article.aspx?x=dnd_4dreye_20130807

Much more to come.  I am sorry for the delay in posting.
Posted by Tyler Jacobson at 10:15 AM 11 comments: