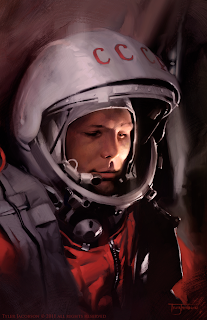 April 12th 2011 was the 50th anniversary of the first manned space flight. That man was Yuri Gagarin, soviet cosmonaut, and his ship was the Vostok 1. I thought I would do a little portrait for the occasion. It has been a while since Gagarin made that first amazing trip and many have followed in his footsteps. Gagarin died in 1968 when is MiG 15 crashed during a training flight.
detail 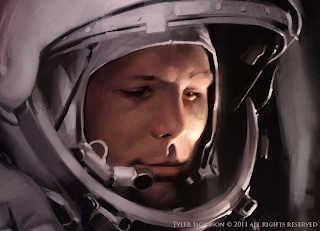 Beautiful piece, man! I love that detail shot. Was this for a job or was it just for funsies?

Thanks Eric. Just a personal piece I have been working on when I could find the time.

Great portrait, I really like the introspective and solitary mood.

I love cosmonauts and astronauts, and there's something so cool about the old space suits. You did a wonderful job!